A demo team consists of 6 starters and 2 extra athletes, just in case. The name says it all: the athletes demonstrate different kinds of skiing techniques and movements at its finest, excellent skiing abilities combined with great acrobatic element …

When it comes to formation skiing, we have a very strong and successful men’s team but also our ladies’ team is not less successful and strong. The goal is to ski as unique and harmonious as possible, whereby the figures during formation skiing change several times – inclusive 360° rotations. The jury focuses exact on the athletes’ legs: speed, level of difficulty, exact performance, synchronicity and creativity are the main evaluation criteria.

The Ski School Maria Alm supports both teams. Some athletes also work as ski instructors and make sure that our ski guests have the chance to learn skiing from the best.

A kind of win-win situation for both sides: a successful transfer of know-how compensates for the considerable material costs; it is pretty expensive to equip 16 athletes with ATOMIC carving skis, which are used in slalom races, appropriate skiing clothes, helmets, ski glasses and ski sticks.

In the meantime: top of the world

You have to work for your success! In winter, the teams train twice a week, however, beside top skiing abilities you also need a certain team spirit and passion for this type of sport. The Demo Ski Teams of the Ski School Maria Alm belong to the best teams in the world: we are the present European champions (men) and European vice-champions (ladies), and also present Austrian national champions. We have been this successful although there exist strong competitive teams, at the national as well as the international level. 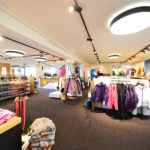